System Eneratptor is designed to take predefined actions in response to events in the surrounding world. The logic system is designed to be easily calibrated and managed. In addition to its predefined logic it allows the human administrator (through HMI) to reverse any automated or scripted decision and to execute any of the predefined actions, thus allowing the operator to tweak the system according to her best judgement. 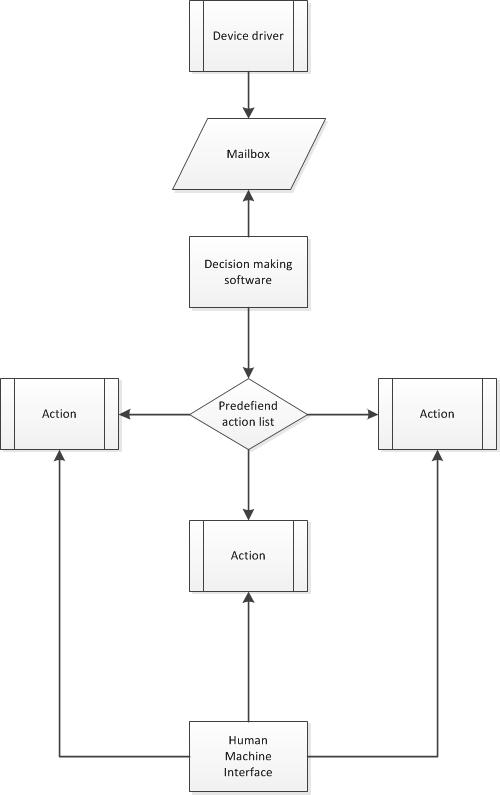 The logic of the system consists of the following concepts:

The basic idea behind this design is modularity. Eneraptor supports any device and can execute any action as long as the driver follows our standard. In this scenario we [the eneraptor designers] expect the device manufacturer (ie air conditioning unit) at least two supply two programs : the device manager and the action program. If there are several actions supported by the device, we expect each to be a standalone program or all actions to be in a single program targeted by different command line arguments.

This driver is not necessarily the same software which is supplied by the manufacturer, it is only a program that communicates with the eneratpr Mailbox.

The design of the mailbox and message structure is still open to debate; all input is welcome!

The mailbox should be event driven, meaning no periodic checking is necessary. The device manager will signal the control program which will in turn read the shared variable for data.

Decision making software is the key mechanism of the eneraptor project. It brings all other components together to ensure all conditions set by (human) operators are met.

The decision making software continuously checks the mailbox for new messages. If any new info is read the software compares it with all the predefined conditions (see predefined action list). If a condition is met, the action is executed. If several conditions are met, all co-responding actions are executed.

This (very elegant) main loop is always executing, however it can be halted by the Human Machine Interface. When this happens the loop still executes, however all but the messages originating from HMI are ignored.

Predefined action list is a list of all the conditions and co-responding actions entered to the system. It is implemented as a non-ordered list of structures containing the information:

The list is saved in a csv/xml file. It is initialized with on the Decision Making Software program startup and then periodically refreshed, insuring no restart is required when additional rules are entered.

Action is a program path and program argument pair, thus allowing the Decision making software to execute it.

There are several rules for the Action developers:

Outside of this very general rules the Action developers have no limitations in writing the Action programs.

The logic component uses three types of messages to connect to other parts of the Eneraptor system. They are the following:

These messages are then transported over the network to their destination.

The device manager logic is twofold: when the device manager signals new available data, it is read from a shared variable (encapsulated within a monitor). The IP socket is used for the reverse connection, when the HMI request a certain value which has to be read. When that happens a request message is sent. The messaging thread blocks until an answer is received. The response is then transformed to Logic -> HMI message and sent to HMI.

The syntax of the request message is irrelevant since the there aren't several data points to choose from. The response however should be a single double value (defined with IEEE 754).

There should exist three types of messages used for communication between the logic and HMI, depending on how should the logic react after receiving a message:

The first message type from HMI could looke like this:

The second type of HMI's request could look like this:

The third message type from HMI could look like this:

Of course all three types of messages could be joined in a single XML file if this would be useful (?).

The logic uses syslog to save a plain text message to the database. However the message has to be formatted, so the information can be extracted by the Statistical Data Analysis Software (Archive and statistics.

The archiving can be initiated for the following reasons:

The configuration consists of a XML file, which is read on startup. The XML file should look like this:

The following interfaces have to be defined by the extern components for them to be seen as a valid Eneraptor component:

The logic can be separated into several key components:

After the initialization is complete this function waits for termination signal (via HMI). When the termination signal is received it should stop all the "Device manager <--> The Logic" threads, leaving only one communication channel open: The "HMI <--> The Logic" thread. The function then waits for the resume signal (from HMI). When the resume signal is received, the configuration file is used to restart the "Device manager <--> The Logic" communication.

It should also be noted that the configuration file may change (due to human interaction via HMI). When that happens the "HMI <--> The Logic" thread signals The startup method which in response rechecks the file for changes and acts accordingly.

Communication with the HMI runs in its own thread (see The startup method). It consists of a blocking socket server that waits for incoming message from the HMI. When the connection is established a new thread is started to deal with the request and the main thread starts waiting for another connection.

This part of the Logic interacts with The startup method for signaling it the termination/resume signal. It is also interacting with the "Device manager <--> The Logic" threads for generating responses to incoming requests from HMI.

Communication with the device managers¶

The other assignment of this thread is to create a response for the HMI. When the request is received the "HMI <--> The Logic" reads the last value read from the thread and returns it to HMI.

Note: It was previously discussed that a new value should be requested from the device manager for the response to the HMI. This is still an option, however the logic software is becoming rather complex. If the device managers check their value often enough and signal for every change then the value should be up to date thus making another communication channel redundant.

The device manager is a program that can read from a measuring device. It reads the value periodically and signals The Logic on every change.